To address the main ideas behind this year’s Nobel Prize winners, two researchers and a researcher from Cinvestav explained during the Institutional Colloquium the impact of these scientific contributions, as well as the research each of them conducts on topics related to those of and the winners.

The 2022 Nobel Prizes in Medicine, Physics and Chemistry are awarded to scientists whose discoveries have enabled us to learn more about human evolution, lay the foundations for a new era of quantum technology and synthesize molecules from simple reactions.

Andrés Moreno Estrada, a researcher at the Cinvestav Advanced Genomics Unit, mentioned that this year’s Nobel Prize in Medicine recognizes research work on population genetics, which is important because it has implications for health.

Svante Pääbo, director of the Department of Genetics at the Max Planck Institute for Evolutionary Biology in Germany, was recognized for deciphering the complete genome of the Neanderthal, an extinct species considered the closest to modern humans.

His work with ancient DNA has made it possible to identify several species that were the ancestors of humans, including Neanderthals and Denisovans, with the presence of genetic fragments of these ancient individuals in certain current populations, Moreno Estrada noted.

This advance was useful in the research of Moreno Estrada and his research group, for example, in determining Denisovan and Neanderthal ancestry in populations from various regions of Mexico. 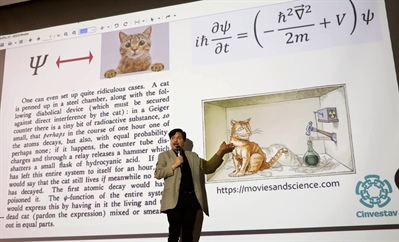 As for the Nobel Prize in Physics, Oscar Rosas Ortiz from the Physics Department of Cinvestava pointed out that it has been awarded in the last 20 years for works that are directly or indirectly related to quantum physics.

This year’s scientists, Alain Aspect, professor at the High School of Optics in France, John Clauser, director of his own company in the United States, and Anton Zeilinger, affiliated with the University of Vienna in Austria, contributed to the experimental testing of the concept of quantum entanglement.

This originates from an experiment proposed by Albert Einstein, Boris Podolsky and Nathan Rosen in 1935, in which two particles (isolated and distant) whose properties are known are intertwined and by making measurements on one it is possible to predict what happens to the other. .

In 1975, John Clauser and his research group reported the first experiment with two photons entangled at the same time; however, their communication is not avoided. Trying to improve this aspect, Alain Aspect built a new version of the configuration in 1982, but the distance between the particles was very small, so their interaction could not be prevented either.

Finally, in 2012, Anton Zeilinger illuminated a special crystal with a laser and created entangled pairs of photons, since these particles were 143 kilometers apart, which prevented the exchange of signals between them.

“These and other experiments have paved the way for new technologies such as quantum computing,” explained Oscar Rosas Ortiz, whose research includes the use of non-classical light, including one- and two-photon states, a related topic to interlocking systems. 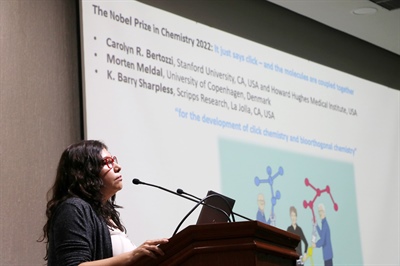 In her participation, María Fernández Herrera, researcher at the Department of Applied Physics at Cinvestav Mérida, spoke about the importance of developing so-called click chemistry and bioorthogonal chemistry to perform simple, efficient reactions without the formation of byproducts.

Barry Sharpless of the Scripps Research Institute coined the term click chemistry for the way molecular building blocks fit together. Later, he and Morten Meldal (University of Copenhagen, Denmark) independently discovered the copper-catalyzed azide-alkyne cycloaddition, a side-product-free reaction that is currently one of the most widely used in various laboratories, including some of Cinvestav.

Carolyn Bertozzi, from Stanford University, United States of America, was interested in studying cell surface sugars, glycans, carbohydrates found on the surface of cells, so she transferred the click reaction to a living system.

Chemistry was able to label glycans with fluorescent molecules without the need to use copper as a catalyst, as it is toxic. Now, these types of reactions known as bioorthogonal contribute to the development of more specific treatments against cancer and other diseases, concluded Fernández Herrera, in whose laboratory they worked with the synthesis of carbohydrates from click reactions.